Madden 18 is finally here, right in time for the NFL 2017/18 season to kick off. We’ve got the full Madden 18 player ratings for you right here, so you don’t need to worry about scrolling through endless in-game menus.

If you need any other information on the game whatsoever, head over to our Madden 18 everything we know guide, where you can find all the info you need on the release date, new features, and brand new story mode of Madden 18. 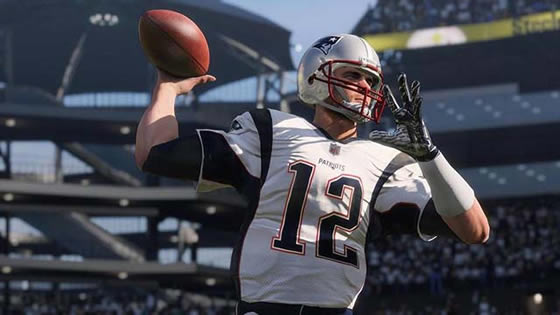 Below, you’ll find the complete list of our Madden 18 player ratings, each sorted by position. We’ve selected the best few players at every position around the field, so you know who the top quarterbacks, running backs, and other players are in Madden 18.

Here’s the most ideal lineup we could come up with, on the offensive side of the ball. Madden 18 is rife with dominating receivers and agile quarterbacks, although it is arguably lacking in a variety of solid tight ends. These are the best Madden offensive players you need in your Madden 18 team.

• QB: Tom Brady – With 5 Super Bowl rings behind him, there’s no doubt that Tom Brady is just about the best QB in the NFL right now. You might opt for Aaron Rodgers if you prefer a slightly more nimble QB, Brady is second to none for pure accuracy and power.
• HB: Le’Veon Bell – Right now, Le’Veon Bell has to be the number 1 running back in Madden 18, combining power and trucking ability with precision and agility. This may of course change once Marshawn Lynch’s ratings are eventually revealed, but right now Le’Veon Bell is the no-brainer.
• WR 1: Julio Jones – WR 1 typically requires a bigger, stronger receiver, able to go up and get contested balls midair with defenders all around. Julio Jones fits this mould perfectly, ticking every box on the list, and providing a more physical option than the likes of Antonio Brown.
• WR 2: Antonio Brown – Brown is the logical option here, boasting a terrific speed rating with solid catching abilities. Brown and Julio Jones are honestly fairly interchangeable in these roles, but we’d prefer Antonio Brown as WR 2 mainly due to his superior agility.
• WR 3: Odell Beckham Jr. – For the slot receiver role, Beckham fits perfectly, able to quickly cut past defenders while also boasting some insane catching skills. Again, Antonio Brown could easily fit into the WR 3 role, but Beckham is preferable due to his slightly superior acceleration.
• TE: Rob Gronkowski – Because who else were we going to choose for the number 1 tight end in the league right now. Gronkowski is second to none at the TE position, able to catch virtually any ball thrown in his direction, while also putting up a solid fight when needing to block.