MUT might just be the biggest mode in Madden 18, which is why we’ve put together this guide on earning coins and other items as quickly as possible.

Madden 18 Ultimate Team has just added the brand new MUT Heroes feature, giving you yet more collections to complete for the vast Ultimate Team mode. In this MUT Heroes guide, we’ll be walking you through how to find MUT Sidekicks, as well as how to then take these Sidekick players and upgrade them to the MUT Ultimate Hero player cards.

But if you instead need anything else to do with Madden 18, including general tips and tricks on this iteration of the sports sim, as well as all the best offensive and defensive playbooks in the game, head over to our website.

When you first head into the MUT Heroes upgrade sets from the Madden 18 Ultimate Team menu, you’ll come to the screen below, where you can find one collection per NFL team. 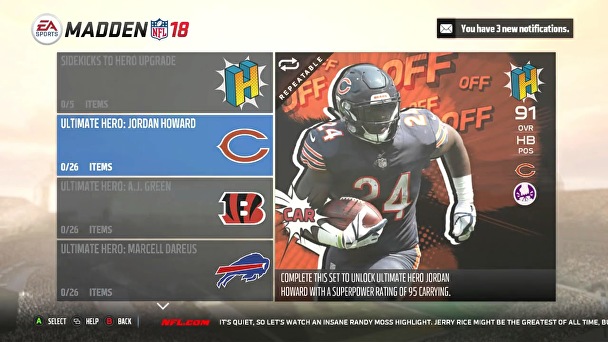 If you select one of the upgrade sets, for example the Chicago Bears, you’ll come to the screen just below, which tasks you with putting together one Elite Token, one Jordan Howard Wildcard player, and a total of 24 MUT Sidekick players, all of which have to have at least an OVR rating of 80. 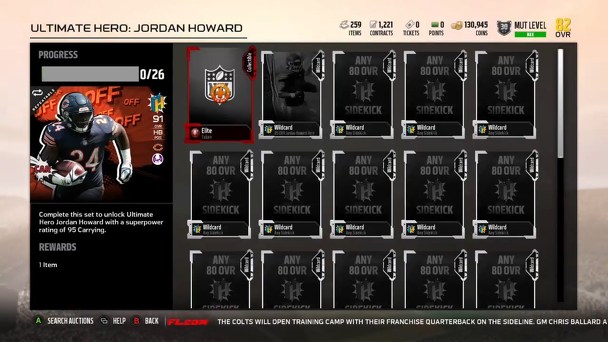 The MUT Heroes cards are all at an overall rating of 91, meaning they’ll give any team an immediate upgrade at any position on the field. On top of this, each MUT Heroes player boasts an elite statistic, for example the Jordan Howard card has a Carrying rating of 95, and the Andrew Luck card has a Throw on the Run rating of 94.

First of all, if you want to collect any of the MUT Hero cards you’re going to need to get your hands on an Elite Token, so head over to our MUT Upgrade Sets guide if you need help on obtaining one.

Secondly, you’ll want the Wildcard 85 OVR version of the player you want to transform into the MUT Ultimate Hero version, and for this, you’ll have to trade in at least five 80 OVR MUT Sidekick players, to earn a single 85 OVR Wildcard player. Unfortunately, the Wildcard player that you earn is randomised, so you’ll have to keep repeating the Sidekicks To Hero Upgrade set at the top of the MUT Heroes section, and see which Wildcard players the game gives you.

Finally, you’ll need to amass a total of 24 MUT Sidekick players, all of which are at least 80 OVR> To do this, you can either head into the MUT auction house and place a bid on a card, or you’ll have to tear through MUT packs, and try your luck at finding some MUT Sidekick players within.

As we said above, every MUT Ultimate Hero player has an overall rating of 91, so it seems like, for the moment at least, as though these MUT Heroes upgrade sets are well worth the effort.

Madden NFL 18 is available now on the PS4 and Xbox One. Stay in the conversation by liking us on Facebook and following us on Twitter. We will offer more news for madden 18 updates. More Madden NFL 18 Coins at mmocs.com.