FIFA 18 is officially here, and with it comes a series of tweaks, changes, and the odd new feature, too.

Here on our main FIFA 18 guide hub page, we’ll take you through all of FIFA 18’s new features, plus provide plenty of general FIFA 18 tips for players of all levels, and gather together links to all of our more detailed guides to specific parts of the game.

Below is the collection of our in-depth guides for FIFA 18. Watch this space as time goes by, as well be continuously adding plenty more guides once we spend more time with the game. 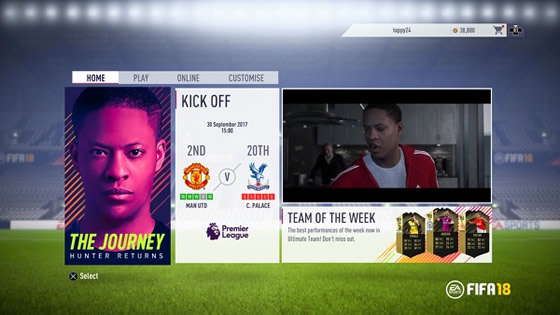 Those fairly minor new features aside, FIFA 18 still differs subtly from prior versions in a number of ways, with a slightly different feel to gameplay, tweaks to the UI, and more.

For returning fans who’ve been playing FIFA 17 right up until 18’s launch, or newcomers who’ve been away from the game for a while, there’s plenty to bear in mind, so here are a few general tips to get you back in the game as quickly as possible:

• Vary your passing – FIFA is becoming more and more a case of space-management – that was already true last year in FIFA 17 – by which we mean the practice of drawing the opponent out of position and creating space for you to progress. Mastering the art of opening up the pitch for yourself is becoming more and more essential, and the best way to do so is with varied passing: a couple short, simple balls into feet at the back, followed by a big switch with the driven pass (R1/RB + Pass), driven lob (R1/RB + Lobbed Pass), standard long ball or maybe even a swanky threaded through ball (R1/RB + Through Ball) will swiftly open up the pitch for you. Keep an eye on your rader for those off-screen Paul Scholes wonderballs!

• Practice your skill moves – We know, practising skills in FIFA is arduous work, but it’ll pay off for you big time in the long run. Turn the difficulty right down and play several games against the computer for the best way to practice against opposition players. We recommend mastering the dummy shot (quickly tap Shoot then Pass buttons) for beginners, before moving onto the more complex stuff. It works wonders against ‘headless chicken’ ball chasers (like us) who you’ll find online, although the computer’s inhuman reactions are a little too good to be fooled at higher levels.

• Pace feels nicely balanced – Believe it or not, for once pace feels pretty good in FIFA, with 18 featuring a tweaked system where Acceleration and Sprint Speed feel quite distinct. Players will take time to ramp up to their top speed, pace vs. strength battles tend to play out more in line with your expectations, and there’s still some meaningful ‘counterplay’ for slower players through containing and positioning.

• Tackling is out, ‘containing’ is in – Tackling is arguably the hardest it’s been in FIFA 18. While the AI will apparently be able to tackle you from just about any angle they see fit, controlling tackling manually out here in the human world is much harder. It takes a moment for your player to start their standing tackle, while slide tackle’s are as weak as they were last year – and the new Hard Tackle is almost totally pointless unless you intentionally want to clatter someone behind for a foul.

• Interceptions happen less often – We’re noticing far fewer inteceptions from players in situations where you would expect them to make one. Your positioning has to be absolutely spot on for you to intercept a pass. We’ve seen ballsa fizzing by quality holding midfielders that are well within reach, so beware the drilled pass in FIFA 18!

• Finesse Shots are back – There’s always one type of shot that’s in vogue every year, and this time it seems to be Finess Shots. They’re not quite as bad as being ‘overpowered’, but we’ve definitely had some luck using them in one-on-ones, more so than any other shot type so far.

• Quick Subs – set up quick subs in Team Management before a game, and you can then hold down R2/RT during a break in play to bring up a Quick Sub suggestion, and X/A to accept.
• Modified Crossing controls – You can now use R1 / RB to perform a high, floated cross, and double-tap to perform a low, whipped cross.
• Hard Tackle – Press Triangle/Y to perform a standing Hard Tackle, which has your player attempt to get ball regardless of what’s in front of them (this normally results in a foul).
• Jogging/Slow Dribbling tweaks – Jog/slow dribble now more useful, with good dribblers able to start animations faster. You can slowly dribble to work some space, then burst into it with speed, like Ronaldo or Messi would, if you have good enough dribblers on your team.
• Set Piece tweaks – only minor changes to set pieces are in FIFA 18, but penalties are the main beneficiary, with them now working in a more ‘point and shoot’ fashion, and goalkeepers no longer jankily flopping over the top of a daisy cutter trickling into the goal.